Last weekend I took a break from working on Deluxe (which was more of a break from playing Riven, since day job stuff has me avoiding my office in the evenings/weekends) to hang out at Buffalo Game Space for BGSjam XVIII. My intent was to be around to assist with any projects that needed code or Blender assistance, but once that wasn't really much of a thing needed I made a little game. 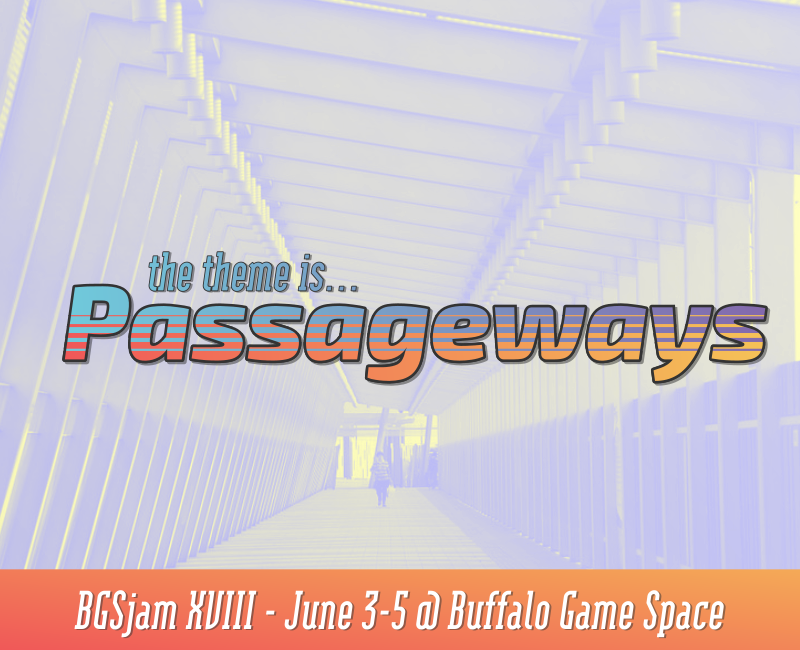 The theme of the jam was "Passageways". There was some really great brainstorming at the start, and a lot of excellent ideas got tossed around by folks. I couldn't stay late as I had double-booked myself, but the idea of a hallway kept coming back to me. Eventually this morphed into the great base-raiding sequence Contra, and I thought it'd be fun to take a stab at remaking that in Godot.

While it's unpolished, I did end up succeeding at remaking that general concept into a game by the end of the weekend. Passageway (very original title) is a small arcade shooter in which you progress down hallway segments by destroying a big red orb at the end of the hall, all while killing/evading enemies.

The project began as all good jam games do - with a player controller. Quickly hobbling together some basic input mappings and attaching them to a KinematicBody got me most of the way there, but almost immediately afterward I decided the smart thing to do is recreate the Creature class/scene I'm (roughly) using for Deluxe. A root KinematicBody with a base collider, a Hitbox area, and a custom Health node with some signals for when it's damaged/killed got me the base scene for the player, enemies, and even the Hallway Switch. Inheriting and adding a new script that contains input parsing drives the player character, some very simple movement logic drives the enemies that move.

The biggest issue I ran into, which I'm still not sure why it was happening, was that the inherited scripts did not fire off the parent functions when the child function is called by a signal connected on the base scene. I had to use the .parent_func() approach to get them to fire, which I'm fairly certain I don't have to do in the Deluxe project.

Once the creatures were in I started adding some basic weapons, which in turn shoot bullets that are also creatures. Super easy.

Next came the hallways themselves, and this was the first "new" thing I did. The game uses a base Hallway scene that has a Position3D that indicates where the next hallway should be connected, and a script with a signal alerting a Hallway manager when it's been "completed". This was meant to be fired off in various ways (kill all the enemies in a room, defeat a boss, etc), but for the jam it ended up only being "Switch" objects - Creature scenes that, when destroyed, tell the Hallway that it's done.

With these elements in place, I blocked out five-ish Hallways and threw them into the Hallway Manager. The end result is the game you can download now on itch.

I'm pretty happy with how this turned out. It was the first game jam I've actually participated in in a while, and it was a lot of fun. Not only that, but I think that this little project could turn into a much larger one at some point. I'd like to make it co-op multiplayer and functional on the BGS arcade cabinet. Maybe add some aiming similar to Sin & Punishment, and obviously give it some real art and music/sfx. So we'll see.

As mentioned at the start, I've fallen a bit behind on Deluxe progress. This whole month I'm dealing with a big release for my day job and I've got a bunch of non-game-dev fun things on my calendar because hell yes it's Summer and I wanna get outside. BUT, I do suspect that in the next week or so I'll start working on it again and will have another update to share following that next sprint.