Global Game Jam wrapped a week ago last Sunday. A lot of things have happened in the last few days, hence the late conclusion post. I'll get into some of that in a later post, so for now let's talk about how things in the Godot VR world wrapped.

Sunday was a pretty short day for me. I had hit a bit of a creative wall, having implemented the basic VR interactions. I decided to spend the final day exploring other features of Godot, specifically the Constructive Solid Geometry (CSG) features. I started tinkering with generating a small level, playing with the different CSG nodes to see what worked and what didn't. Turns out they can be a bit fickle, but for the most part they worked very, very well. I was able to rapidly build not only a small stage, but a few bits of set dressing as well. 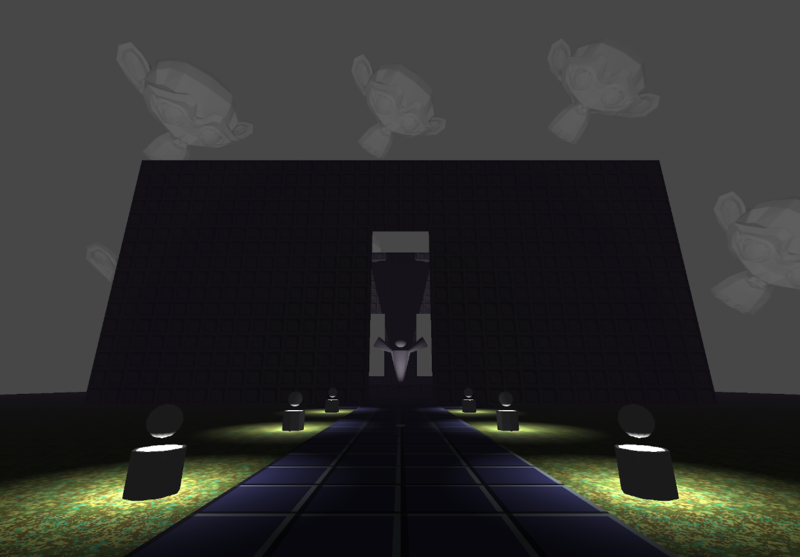 I created a little area with a big building you could run inside of first, playing with scale to see what felt good inside the HMD. Once that was hammered out I started adding some textures (quickly created in Aseprite), and then some props and lighting fixtures. By this point I had inadvertently created a nice setting for a PS1-esque horror game, and it was at this point I decided to call it a day (jam?). It was about 3pm on Sunday, so the odds of this little exploratory demo turning into a game were slim. Satisfied (relatively) with what I had learned, I wrapped the project, packed things up, and headed home.

I learned a good deal about how to work with the VR features of Godot. If you're interested in trying it out I highly recommend reading through the excellent documentation on Godot's website, as well as checking out the OpenVR assets developed by Bastiaan Olij if you're using SteamVR compatible platforms. Without that asset this wouldn't have happened at all.

I've posted builds of the project to itch.io for your perusal, and the source code is available as well to poke at and dissect. If you're interested in how any of it works or would like to chat about VR in Godot, shoot me a line; I'm more than happy to discuss it and help out where I can.